I grew up reading comics every time we went to my grandparents, we would sneak into the storage room and go through my uncles old DC comics. We would read stories about the Justice League or Superman or Batman even Sgt.Rock. As I got older I started my own little collection. My flavour of choice was always X-men (still is to this day) I have my first purchased comics still. Some great Uncanny issues that kicked off the Jim Lee Blue/Gold X-men days. I was not a big novel reader as a kid but I have read thousands and thousands of pages of comic books.

I am not sure why this concept slipped my mind but i have boxes and boxes of comics that no one ever gets to read, I don’t read them they just sit in a box and collect dust. So why not bring them to school? Why not give my students a chance to really get into characters and their stories the way I did?

So I brought some in, just a box to start. Some Superman, a bunch of X-men, some old Spiderman stuff. A pretty good little mix. Comic books are not just about superpowers and heroics. Sure that stuff is all there in spades but there is also messages of tolerance, equality and empowerment. While I think the costumes could probably be a little less revealing and maybe we could throw in a few more realistic body types, Wonder Woman is one of the most powerful characters in the DC Universe. There are more and more characters of prominence now a days that reflect the world we live in.

The largest bonus that I have realized in these few short days since the comics arrived is that it has got kids back to reading that are feeling a little novel fatigued. They are asking if I have certain characters they are interested in or if they can just keep reading instead of some other tasks. It is fun and sparking an interest in reading in this last 3rd of the school year. 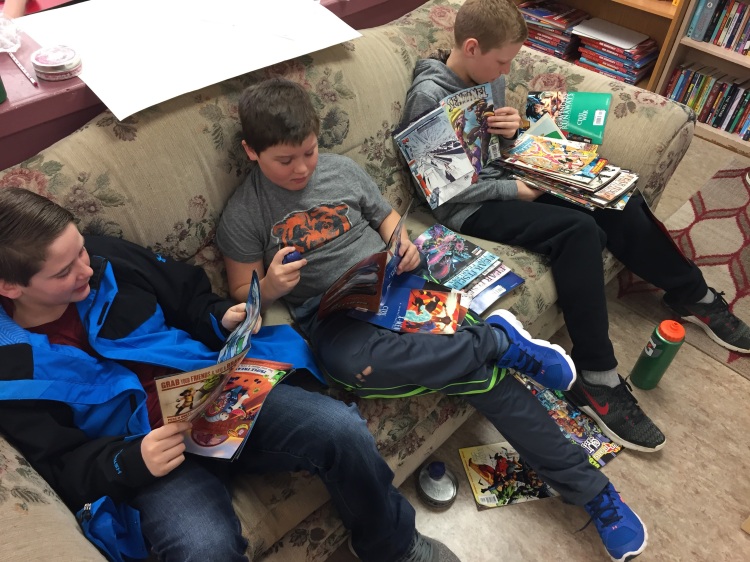